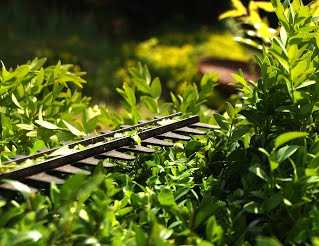 How often to trim shrubs? Most shrubs in the Webster, NY area need a trim at least once per year; many shrubs need a trim twice per year. If the shrub was just extensively trimmed, such as removing 6 inches of growth to reduce the height of the shrubs to below the windows, it may temporarily need as many as five trimmings per year. This is because the shrub is attempting to reach its former height.

If shrubs are trimmed less frequently, the thick growth may cause inadequate light to reach all branches; this may cause hollow shrub syndrome, causing the shrub to die prematurely. Also, it is more difficult to get the shrub to be aesthetically pleasing after it was neglected for several years.

An interesting fact about trimming shrubs is that, because of apical dominance, it leads to a fuller looking shrub. That means that wherever one cut was made, two to four new sprigs of growth appear. Even if the shrub has not yet grown to the desired size, it is still a good idea to trim it at least once a year to prevent the shrub from having just two or three stalks. By doing so, it helps to shape the shrub. Paul’s Landscaping makes sure to trim shrubs using the best methods for the best results. Using a hedge trimmer by oneself without adequate knowledge of how to do it may not necessarily lead to great results.